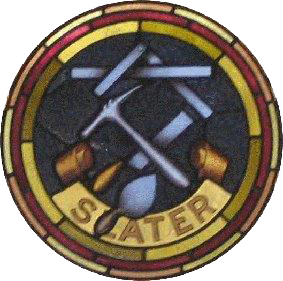 The Slater Trade has always been the smallest in membership numbers of all of the Three building trades in Dundee.

The last in line of precedence of the three building trades, whilst also mentioned by James VI in 1592, their earliest approved existence is thought to be around 1642, when the rules of their incorporation were started to be documented.

The lack of numbers meant that finances were always a problem. Evidence also suggests that their record keeping also lacked diligence, but this may have been due to the lack of resources to pay a lawyer for entries into the lockit book.

Special mention of the Slater Trade is contained in the fact that they owned ladders, and these were used in fire fighting within the city. This service, rendered without recompense, gained the trade relief from the burden of quartering soldiers in 1762.

The Slater Trade’s lack of numbers and finances also served to discourage Annual Dinners and Explorations- which were more common in the other building trades, due to their trades funds extending to these levels of generosity.

However, their financial reserves were also well-nigh depleted by a bad investment in the late 1800, which resulted in a significant write off. The Clerk to the trade went bankrupt as a result, and could lnoy return 2p in the £ of the sum invested.

Such financial distress meant that the burdens of being a Trade, and contributing to such causes as its annual contribution to the Dundee Royal Infirmary had to be missed on occasion.

The twentieth century has seen the Trade struggle to attract new members, and its numbers remain low. The burden of keeping up with its financial obligations as a body and member of the Three United Trades is likely to remain going forward. However, as a closed trade, it remains true to its historic roots and its current members remain committed to keeping this institution going for future generations.