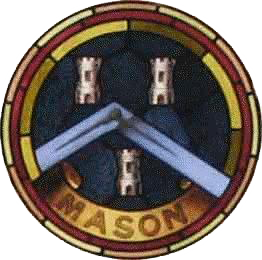 The Mason Trade of Dundee have some difficulty in establishing exactly when they became an Incorporation. They are regarded as being the first in precedence of the Three Building Trades. Despite James VI granting them powers to appoint a Deacon as far back as 1592, it is not until 1659 that the Town Council appears to formally recognise the rights of the Incorporation in an Act of Council.

The nature of a mason’s work is unusual in that he sells his own skills rather than a specific product, and indeed applies his skills mainly to a building. That meant that in order to earn a living, he had to be itinerant in nature, and travel where the building work was taking place. This meant that Masons rarely settled in a specific town, and hence did not require the need to open a shop or business to sell his wares within a town or city. Hence the number of members of the Mason Trade was rarely large at any time, and may help explain the lateness of formal
recognition of the incorporations.

Such travelling also meant the introduction of Lodges, as at every building site. The first buildings to be constructed were these lodges for the Masons to be employed on site. These buildings were to be wind and water tight and provide a place to relax at the end of the day’s work. Freemasons adopted this term of lodge, which is inherited from this earlier tradition, as a place to associate and meet.

The Dundee Mason Trade records several links to Freemasonry with members who were not actual operating masons, described as “entered apprentices” or “Freemasons”. So there appears to be a significant overlap of membership and connection with the growth of Freemasonry in the Dundee area. This relationship grew strongly in the early eighteenth century before dropping off as formal recognition of the local lodge of Freemasons, granted by the Grand Lodge of Scotland in 1745, seems to have empowered the freemason independence thereafter.

Like all Trades, the Mason Trade hired out its Mortcloth to trade members for funerals. The Dundee Mason trade is also recorded as owning a hearse for similar purposes. These items were often left in the care of the Deacon. However, the costs of maintaining them soon showed that these were uneconomic investments and their use died out.

The Mason Trade owned several properties during the nineteenth century, as well as interests in the Trades Kirk, and the later East Church, but costs of refurbishment and repairs of these assets made members cautious, and disposal of these assets was grasped when the opportunity arose. Indeed, the use of property for investment was dismissed by a contracting membership during the late nineteenth and early and mid-twentieth century, with proceeds of remaining assets invested to cover ongoing running costs of the Trade.

The Mason Trade in the twentieth century consisted of and evolved into Masters of Building companies which saw expansion in the second half of the century. It served as a forum for these businessmen to socialise and discuss their trade together.

An annual exploration to see some construction or building project was extremely popular with members well until the 1980’s when rising costs, and an eventual lack of Trade funds prevented these traditional events from continuing.

The rationale of the trade had really disappeared in the Nineteenth century, and this had the effect of reducing membership to more of a family and social nature.

However, this trade has never opened itself up to outside membership, and remains to today with members who are in the stone and brick building trades, and their families.

Next: The Wright Trade